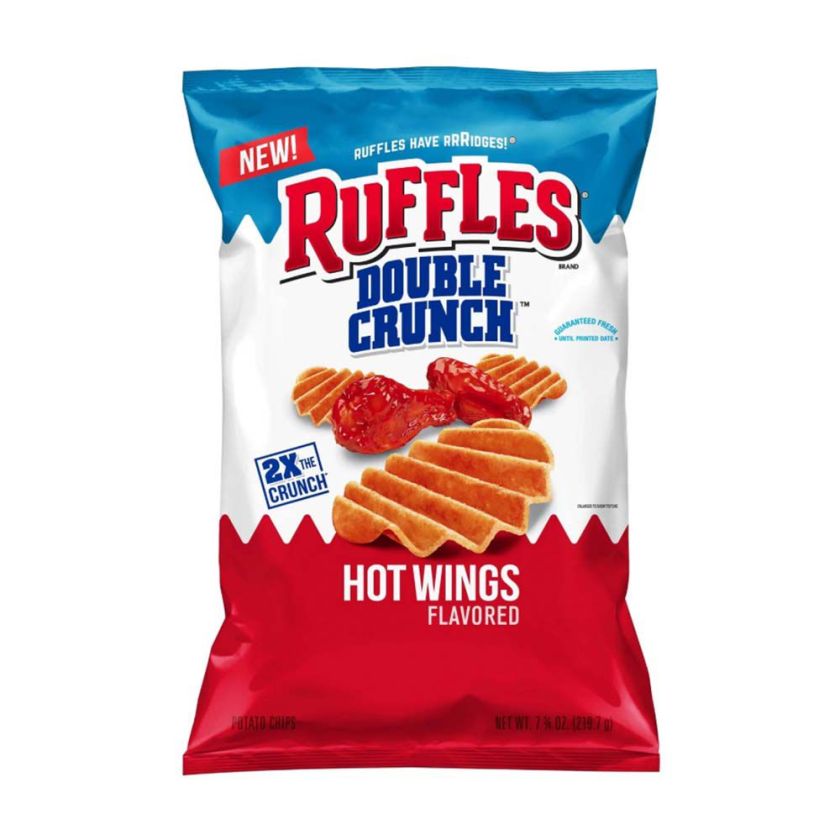 So, this is what it’s come to. My inability to sit down and watch a two-hour movie has put me in a position where I need to set aside any journalistic integrity I didn’t know I had. But also, not really, because if you want to write about Ruffles all day, more power to you, my fellow artist. So that’s that. Let me hop off my soap box now and get to why everyone is here, my review of the Hot Wings flavored double crunch Ruffles.

To open, I want to say that this isn’t a bad chip. It threw me for a loop though, because I was expecting an overwhelming flavor of buffalo sauce with no actual no actual wing taste, but I was wrong. Which is a valuable lesson on chips and the eating of chips; Don’t judge a chip by its cover and/or packaging. The Wing chip had a chicken-y/ bony flavor more that it did a buffalo sauce flavor. The chicken flavor though, was not overpowering to the point of grossness though (but chicken caldo Ruffles, what an idea for the summer). The mix of flavors in the wing chip did confuse me for the first couple of bites because even though the chicken flavor was more present it wasn’t all that strong. It was odd if anything. Which brings me to the second part of this culinary adventure.

As stated before, the Ruffles Buffalo chip takes the 007 route with its flavor and keeps a low profile. Because of this I couldn’t really figure out what I was tasting until I started putting more chips in my mouth at the same time. And even though this wasn’t the case for me, the focus on the wing flavor instead of the hot sauce might turn some people off.

Sometimes these experimental chip flavors tend to give a flavor so strong (and repulsing) that after one chip, the only thing you want to do is spit it in the face of the person who sold it to you. But that won’t happen with this chip. Because of its more subtle flavor profile, it’s not so much a bad flavor that you’ll have a risk of tasting but a confusing (and maybe enjoyable) one. And due to that, this is a chip worth checking out.

This site uses Akismet to reduce spam. Learn how your comment data is processed.